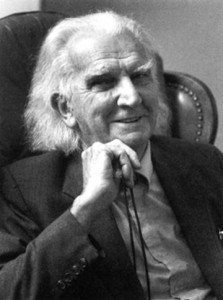 Kenneth Boulding and Bill Gore on hierarchy’s decease and cure

Here is how Kenneth Boulding described the need for hierarchy in his 1953 book “Organizational Revolution”:

The universality of organizations of any size above the very smallest and most informal indicates that it arises out of some deep necessity. This necessity seems to lie mainly in the nature of a communications system. We have seen that in the simplest machinery, as we as well as in the most complex organization, the function of the executive is to receive information along one set of channels of communication and to transform this information into “orders” which are sent out along other channels. The powers of the human individual, however, to receive information, to assess its relevance to the role which he is playing, and to interpret the information in the form of orders are very limited. It would be utterly impossible, for instance, for the president of even a small corporation to receive and assimilate all the information which is being received daily by the “receptors” of the business; it would be equally impossible for him to issue orders to all the “effectors” of the business. Hierarchy, therefore, acts as a sieve for information and as an analyzer of orders, preventing unnecessary information from reaching the top, transforming at each level some information into some orders, and expanding the general orders which come down from the higher levels into particular orders at the levels of execution.

The necessity of hierarchy in the structure of organization has created a severe moral dilemma which is by no means yet resolved. On the one hand we have the pull toward the organizational necessities of hierarchy, toward an aristocratic, highly stratified society of status. On the other hand there is a profound pull toward the moral ideal of equality…  The tension created by this dilemma has, I suspect, been a democracy on the one hand and the market economy on the other can be regarded as partial solutions to this problem.

After explaining the necessity of hierarchy and two solutions to deal with it Boulding delivers his blows to both, and hence puts little hope in their helpfulness for large organizations:

Neither of these solutions is wholly satisfactory. The forms of political democracy are no guarantee that a state will be able to satisfy its people by an adequate performance of its functions, as the history of Germany so deplorably illustrates. It is not enough to allow the last hen in the pecking order to peck the first. There must be, as well as the forms of democracy, a spirit of mutual respect and an ability to communicate all up and down the hierarchical line. The market-economy solution likewise has grave weaknesses in practice… It is subject to serious instabilities, and it does not prevent the growth of organizations which are large in themselves, even though they may be small relevant to the total market. It is impossible to pretend that organizations like General Motors, Standard Oil, or du Pont are cosy little family businesses; they are large enough to exhibit within themselves almost all the internal problems which face a socialist state.

Just about this time a Du Pont engineer Bill Gore arrived at a similar conclusion, quit it and started in his basement a company today know as W. L. Gore. Two decades later, in an internal 1976 memo “The Lattice Organization—A Philosophy of Enterprise” he formulated his no- hierarchy solution to the communication problem:

Cooperation between two people is relatively excellent… With increase in the number of cooperators, communication becomes more complex, less efficient, and limitations arise in the kinds of possible communications. A precipitous drop in cooperation appears as the group size becomes large enough so that everyone no longer “knows” everyone else. At this point one hears the “we” decided, or did, or believed, etc., become “they” decided, etc. This precipitous drop in cooperation is difficult to forestall in groups larger than about 150 persons. Beyond some such level, it becomes necessary to impose rules, regulations, procedures, and the like that dictate how the cooperation shall be done…

One desirability of the good society is that each human has the opportunity to maximize his accomplishments. Enterprises designed to do this are not likely to involve large groups, and usually will consist of not more than 150 persons. If the norm in our society is the utilization of say l0 percent of our inherent human capabilities, what would be the result if we were able to restructure to enable this to double to 20 percent?

W. L. Gore is today a world leader in Teflon-based products with over 8000 people and $2 billion sales. But it still keeps its business units not larger than several hundred people and doesn’t need—and doesn’t have—any hierarchy.