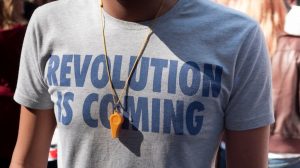 In early November, 720 participants will gather at the 2nd Campus of Liberated Companies event in Paris. They will come to learn from liberating leaders and liberated companies about one of the most surprising corporate phenomenons since the 1960s: how hundreds of companies including multinationals such a Michelin, Decathlon and Airbus are transforming their hierarchical bureaucracies into trust, self-realisation, and self-direction based organisations.

In Western Europe, the Scandinavians are at the top, the Latin Countries, France included—at the bottom, and UK—in between. Nothing unusual, but here comes the downer.

The best country—Norway—has only 17% of engaged employees, while the Western Europe’s average is 10%. Put differently, only 10% of western Europeans come to work in order to promote their company’s goals. The vast majority are 9-to-5, working-for-the-paycheck, disengaged employees.

The rest—think Monty Python—are actively disengaged and having fun at work by actually sabotaging it. If you compare an average company to a boat of eight, there is one chap rowing to win, five making splashes (so the first believes that they work), and the last two are rowing powerfully—backwards. No wonder only 1% of companies survive forty years.

You can read the full article  here