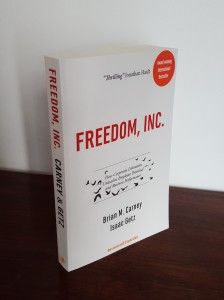 Since 2009, it’s time for a new, revised and expanded, edition of our book.  It is now available with Argo Navis, imprint of Perseus Books, both in print and ebook formats.

“Brian M Carney and Isaac Getz’s book Freedom, Inc. is after my own heart. Its core idea of empowering employees to lead organizational growth is the holy grail of corporate sustainability and the only definitive antidote to enterprise rejuvenation. The book is indeed a must-read for all managers and proprietors who are serious about remaining relevant in the shifting sands of time!”

“When do you do your best work? When told how to do your job, or when you know — and embrace—the reason why you are working? We all know the answer. Carney and Getz help you apply this fundamental insight to liberate your company, your employees, and your life. This thrilling book has the cure for what ails most companies, and perhaps even most economies.”

Corporate liberation is not a strategy. It is a business philosophy that leaders around the world are using to radically transform their organizations. Liberating leaders believe that a workplace based on respect and freedom is a more natural environment than one based on mistrust and control. So they acted to align their organizations with these beliefs: They liberated people’s initiative and potential and with it, unshackled their companies’ performance.

A lot has happened since Freedom, Inc. first appeared in 2009. The book itself has been translated to six other languages. In France, it won the best business book award and was the No.1 business/management bestseller on Amazon.fr nine months in a row almost without interruption. More importantly, it has inspired hundreds of leaders to launch their own corporate liberation. The French daily Le Monde has heralded the start of a corporate liberation movement in France. Since then, the phenomenon has made the cover of leading periodicals, been shown on the evening news of major European TV chains, and been the subject of a 90-minute TV documentary that broke all the records for popularity.

Most liberated companies have been small and medium size—though some have grown tremendously since. Yet increasingly, multinationals such as Michelin or Decathlon—operating in Europe, America and Asia—are joining the corporate liberation movement that pioneers such as W.L. Gore and USAA began.

Corporate liberation has no frontiers, geographical or industrial. Vineet Nayar has liberated an Indian high-tech giant and David Marquet, a U.S. nuclear submarine. Leaders of organizations of all sizes and types are shedding their hierarchies and bureaucracies and transforming them into respect- and freedom-based workplaces. Every morning their employees go to work, but many prefer to say they go to have fun—pursuing a common dream using their own initiative. Incidentally—or naturally—their organizations routinely outperform the competition. In other words, respect and freedom breeds fun and greatness.