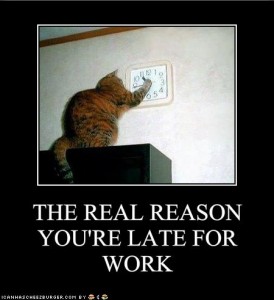 I’m often late. Fortunately, I have no boss and my students—from whom I often rob 5 minutes of lecture time (although I try to make up for it with class-relevant jokes) —can’t punish me. But bosses can—and usually do. The results?  Some results are guaranteed: fear and stress. And lateness? It diminishes where the boss is watching and continues unabated when he isn’t, like shipping late to customers (I say ‘he’ because it’s a male tendency to manage through punishments, although I know of several female executives who “resolved” lateness issues by imposing fines).

The leader—that is, a person who is in service to his team and constantly looking for what he can provide so they can do even a better job—won’t go that way. Because he is trusting his people, he (1) will presume that the person is not late on purpose, and (2) will try to understand the cause and help her to solve it. Thus, when Zobrist learned that one operator was late because his old bike broke, he arranged for maintenance to check and repair the bike.

Sometimes however, with all the transportation and other causes removed, the person is still late, chronically—like me. Is there a cause? Sure. The psychologists will say you that any repetitive non-adaptive behavior comes from some “defective” belief or trait. The one at work here is our belief that we’re better, more capable than we are in reality. Thus, most people believe that they are capable to achieve more in a given time than they really can. As the result, they try to squeeze 3 tasks instead of one into the one hour before their meeting, and they obviously never get them done on time and hence, are compulsively late. So, as a great liberating leader, Bob Davids, advises: “Try to do less and be compulsively early.”