A Humane Economist on the Meaning of Work

Röpke was walking along a road with a famous colleague Ludwig von Mises. Walking by land that was in high demand for residential and commercial development given over to an elaborate tangle of separate plots and shared irrigation, Mises remarked that it was “a most inefficient way of producing vegetables.”  “Perhaps so,” said Röpke “but it is a most efficient way of producing human happiness.”

Röpke was a firm defendant of the free-market economy. Yet, he considered the man being fundamentally moved by other than purely economic—he called them, utilitarian—needs. He was also a rare economist interested not only in the market actors—entrepreneurs, merchants, etc.—but in the people who work within businesses. 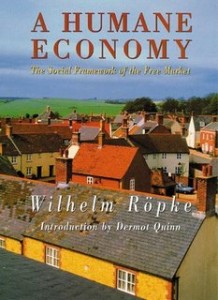 “Navigare necesse est, vivere non est necesse, says an inscription on an old sailor’s house in Bremen; we may generalize this into saying: Life is not worth living if we exercise our profession only for the sake of material success and do not find in our calling an inner necessity and a meaning which transcends the mere earning of money, a meaning which gives our life dignity and strength.

It is a petty and miserable existence that does not know this, that regards the hours devoted earning money, as a liability to be balanced only by the satisfactions which the money counterpart of work procures. This feeling for the meaning and dignity of one’s profession and for the place of work in society, whatever work it be, is today lost to a shockingly large number of people. To revive this feeling is one of the most pressing tasks of our times…”