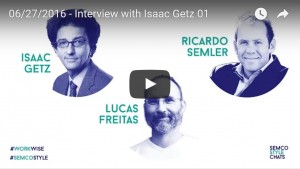 On June 27 we had a 1-hour discussion with Ricardo Semler on how France became the first country in the world where there is a true corporate liberation movement. Not 1, not 10, not 100 companies are radically transforming there hierarchical bureaucracies into a freedom- and responsibility-based organizations… but hundreds of companies of all sizes and industries. In the last 3 years companies such as Michelin, Airbus Industries, Decathlon and hundreds of SMEs joined the movement. More, public administrations are starting to join it too.

All that sounds unbelievable and it should unless one learns–as Ricardo was willing to–that a unique eco-system has been created in France which facilitated the emergence of the corporate liberation movement. This movement became so strong that no one can predict anymore where it will stop.

No other country has experienced it which doesn’t mean it won’t. Next goal is to recreate what is happening in France in several other countries.

On June 30 at 7pm Central European Time, we will have a 1h webinar at Ricardo Semler’s platform to elaborate further on this extraordinary phenomenon.

You can register to join the webinar here .

One thought on “Ricardo Semler discusses how to actually do #CorporateLiberation with @isaacgetz. Next : June 30 at 7pm CET”